NEW FUNCTIONS etc
1.You can run ExTiX from RAM. Use boot alternative 3 (load to RAM) or Advanced. A wonderful way to run Linux if you have enough RAM. Everything will be super fast. When ExTiX has booted up you can remove the DVD or USB stick.
2. You will have the opportunity to choose language before you enter the Deepin 15.11 Desktop. All main languages are supported.
3. I have replaced Deepin Installer with the Reborn version of Deepin Installer. Better in every way.
4. I have replaced kernel 5.0.8-extix with kernel 5.3.0-rc6-exton. Kernel 5.3.0-rc6 was released 190826.
5. Spotify and Skype are pre-installed.
6. You can watch Netflix while running Google Chrome.

MORE NEWS 190828 ABOUT ExTiX Deepin 19.8
I’ve released a new version of ExTiX Deepin today with Refracta Snapshot and kernel 5.3.0-rc6-exton. Deepin 15.11 (latest version released 190719) is made in China. Deepin is devoted to providing a beautiful, easy to use, safe and reliable system for global users. Previous versions of ExTiX Deepin were based on Debian and Ubuntu. ExTiX 19.8 is a live build of Deepin 15.11, which is based on Debian unstable. All packages have been updated to the latest available version as of today. Study all installed packages in ExTiX Deepin 19.8 Build 190828. So ExTiX 19.8 is based on Deepin 15.11 and Debian unstable. I may add that there is no other live version of Deepin 15.11 (as far as I know).

Refracta Snapshot
While running ExTiX Deepin 19.8 live or from hard drive you can use Refracta Snapshot (pre-installed) to create your own live installable Deepin/Debian system. A ten year child can do it!

ChromX (Chromium OS), Exton Build 190824, with Spotify, Gimp and a lot of other apps working fast and responsive (after you have installed Flatpak – “An app store and build service for Linux”) About ChromX
I have compiled Chromium OS from source for the fourth time. Chromium OS is an open-source project that aims to build an operating system that provides a fast, simple, and more secure computing experience for people who spend most of their time on the web. My Chromium OS Build 190824 is for all 64 bit “normal” Desktop computers and laptops. If you have unusual hardware you could check out ArnoldTheBat’s special Chromium OS builds.

Most important changes
This version (190824) replaces version 181218. You can now use Flatpak to install Spotify and many other nice/necessary apps. Read at my INFO site about how to use Flatpak.

Why should I use ChromX?
They are many Chromium OS builds out there. Many more mature and ready to go than ChromX. For example CloudReady. ChromX Build 190824 is nevertheless more fun to use in my opinion. Using Flatpak you can tailor the Chromium OS system according to your needs.

SCREENSHOTS when ChromX is running
1. Installing Flatpak
2. Installing Linux BETA (a Debian system)
3. Installing Spotify
4. Installing Gimp
5. ChromX Desktop (you can use any picture you have on your computer as wallpaper) Compatibility :: August 2019
Unfortunately not all systems made for Raspberry Pi 3 and 2 will run on the new Raspberry Pi 4 computer. They need to be upgraded with a new kernel. I therefore have to upgrade the systems I distribute. I.e. RaspEX, RaspEX with OpenCPN, RaspEX BunsenLabs, RaspEX Kodi, RaspAnd Marshmallow, RaspAnd Nougat 7.1.2, RaspAnd Oreo 8.1, RaspAnd Pie, EXTON OpSuS Rpi, FedEX Rpi3 and RaspArch. I have until now (190812) only upgraded RaspEX, RaspEX Kodi, RaspArch and RaspEX with OpenCPN. Read about the new Raspberry Pi 4 .

BENEFITS of Arch Linux/RaspArch
“Cutting Edge”-software and speed. A member on this site recently wrote this about RaspArch: I’ve used Slackware, Debian, Gentoo, Ubuntu & Arch. I prefer Arch. Ubuntu is easier to install, Arch is easier to keep up to date. You do not go through big, painful, changes every year instead you just update, once in a while, make changes if instructed. Arch has most of the benefits of Gentoo without the pain of recompiling _everything_. When you do need to build a package in Arch its painless especially if you use one of the tools that support AUR (I like Yaourt). Arch avoids the politics of Debian and Ubuntu and delivers a great Linux distribution. RaspArch now brings these advantages to the Pi 2.

Study all installed packages in RaspArch 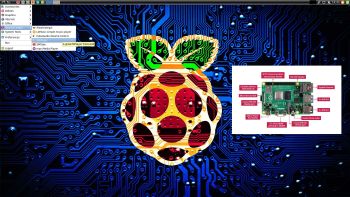 NEWS 190807 about RaspEX with LXDE based on (upcoming) Ubuntu 19.10 Eoan Ermine. Works on the new Raspberry Pi 4
I have upgraded the whole system and replaced the old kernel 4.19.50-exton-v7+ with kernel 4.19.63-raspex-v7l+. RaspEX Build 190807 is a Linux ARM system for Raspberry Pi 4, 3 Model B, 3 Model B+ and Raspberry Pi 2. It is based on Debian 10 Buster, Ubuntu 19.10 and Linaro (Open Source software for ARM SoCs). In this new version (190807) I’ve installed Wicd Network Manager. Both Firefox and Midori Private Browser are pre-installed. I have also installed Samba and RealVNC so you can connect to your Windows computers in your Home Network and/or control RaspEX on your Raspberry Pi 4, Pi 3 or Pi 2 from your Windows computers with VNC Viewer and/or PuTTY (Telnet and SSH client). Furthermore some extra Network Tools, SMTube (YouTube browser which allows to browse, search and play YouTube videos), PulseAudio for better sound in YouTube and Raspotify – Raspotify is a Spotify Connect client for Raspbian on the Raspberry Pi that just works. Study all installed packages in RaspEX Build 190807.

Compatibility :: August 2019
Unfortunately not all systems made for Raspberry Pi 3 and 2 will run on the new Raspberry Pi 4 computer. They need to be upgraded with a new kernel. I therefore have to upgrade the systems I distribute. I.e. RaspEX, RaspEX with OpenCPN, RaspEX BunsenLabs, RaspEX Kodi, RaspAnd Marshmallow, RaspAnd Nougat 7.1.2, RaspAnd Oreo 8.1, RaspAnd Pie, EXTON OpSuS Rpi, FedEX Rpi3 and RaspArch. I have until now (190807) only upgraded RaspEX and RaspEX Kodi. Read about the new Raspberry Pi 4 .

ABOUT RaspEX Kodi
RaspEX Kodi Build 190803 with LXDE/Kodi Desktops can be downloaded from SourceForge.net for free. The system is made especially for the new Raspberry Pi 4, but can of course also be used on a Raspberry Pi 3 Model B+, Raspberry Pi 3 Model B and on a Raspberry Pi 2 Model B. RaspEX Kodi is based on Debian 10 Buster, Raspbian and Kodi Media Center. In RaspEX Kodi I’ve added the LXDE Desktop with many useful applications such as VLC Media Player and NetworkManager. Makes it easy to configure your wireless network. I’ve also upgraded Kodi to version 18.3 Leia, which makes it possible to include useful addons such as Netflix, Plex and Amazon Video. Which I’ve done. Study all included packages in RaspEX Kodi.

RaspEX Kodi performance
RaspEX Kodi is a very fast and responsive Rpi system. Much due to very low memory (RAM) usage. About 120 MB as this screenshot shows. I’ve said that RaspEX LXDE Build 181015 is very fast. RaspEX Kodi is even faster especially if you use the new Raspberry Pi 4 to run it. The video and sound quality is also very very good. Even while running RaspEX Kodi on big TV screens. I.e. you can really enjoy Netflix and YouTube running on your Rpi mini computer!

Kodi is a trademark of XBMC Foundation