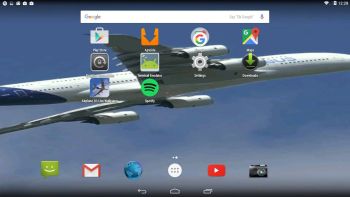 Android-x86 KitKat 4.4.4 Exton build 160214, version 9, is a ready!
I’ve added Mesa (3D Graphics Library) 10.5.9 for better Graphic performance. The system can run live (from CD or a USB stick) on almost all laptops (and some Desktop computers). For example Acer (Aspire), HP, Samsung, Dell, Toshiba, Lenovo, Thinkpad, Fujitsu, Panasonic and Ausus laptops. I can also mention that I could run this version without problems on a HP Pavilion 500 Desktop Computer. The Android system is distributed in the form of an ISO file as the rest of my Linux distributions. I.e. you must (as usual) burn the ISO file to a CD if you want to run the system live on your computer or install it to hard drive. Read about how to burn ISO files. Or skip that. Just use ImgBurn. Nothing can go wrong. You can easily install the system to your hard drive and install new apps. You can also install new apps while running the system live. Google Play Store and Aptoide App Manager are pre-installed so you can just make your choices…

Updates
If you install Andriod-x86 to your hard drive or to a USB stick with persistence installed apps will be automatically updated/upgraded via Google Play Store. The system will check for updates all the time or after a reboot. It works in the same way as on your Android phone.