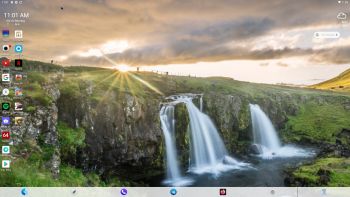 NEWS 210411 about AndEX Pie 9.0 with GAPPS
A new build of AndEX Pie is ready. It has GAPPS (Google Play Store etc), Aurora Store, Netflix, Spotify and many other apps pre-installed. I’ve replaced Pie Launcher with Launcher for Mac OS Style. The best launcher I’ve ever tried.

MORE NEWS 210411 about AndEX Pie 9.0
My first build of AndEX Pie is from 190912. In this new build I’ve upgraded all included apps and added Spotify. My upgraded build of Android x86_64 – andex-pie-x86_64-gapps-aurora-netflix-spotify-1580mb-210411.iso – can be installed to hard drive or on a USB stick. You can also run the system live. I.e. from a DVD or a USB stick. On some computers you’ll have to start up AndEX 9.0 in compatibility mode (VESA) though. The sound and video performance is generally very very good. Google Play Store works very well in this build of AndEX Pie. So does the Netflix and Spotify app. If you have a touchscreen you can also (for example) run CarX Drift Racing 2, Hunting Clash, Nova Empire and Bowling Crew Clash.

Upgrade from previous versions of AndEX Pie?
If you already have AndEX Pie Build 190912 or 200301 up and running there is no need to acquire the newest version from 210411. Just upgrade all apps to the latest version of today and you’re done! Use Google Play Store for that. You can of course also install for example Google Maps, Google Earth, YouTube, Aurora Store, Spotify, Mint Browser and Google Play Games yourself if you want.