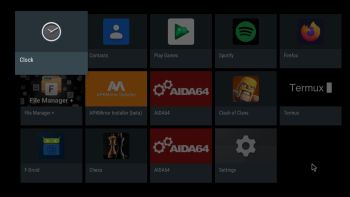 ABOUT RaspAnd 12 – Build 220419
RaspAnd 12 runs very well on a Raspberry Pi 4. I.e. the system is pretty responsive if you use a micro SD card of good quality. RaspAnd 12 has the following apps pre-installed: Google Play Services (and some other Google apps), Spotify, Firefox Browser (so you can watch YouTube), F-Droid (Free and Open Source App Repository), Clash of Clans and Aida64. You’ll need Google Play Services for some games to work. Among them Clash of Clans.

ABOUT Android 12, which was released 211004…
Read also an article about The Evolution of Android – List of Android Versions and Release Dates.

PLEASE NOTE that you must be aware of the fact that the Raspberry Pi 4 computer has its limitations and that Android 12 is a very advanced Linux system. Having said that I must also say that the apps I have included in this Build (see above) work very well.

Read about my Android-x86 Systems – 10, Pie, Oreo, Nougat, Marshmallow, Lollipop and KitKat at
andex.exton.net – latest is AndEX 10 (with GAPPS) and AndEX Pie 9.0 (also with GAPPS)!
and
about my Android 12, 11, 10, Pie, Oreo, Nougat, Marshmallow and Lollipop versions for Raspberry Pi 4 and 3/2 at
raspex.exton.se – latest is RaspAnd 12 (without GAPPS), RaspAnd 11 (with GAPPS) and RaspAnd Oreo 8.1 (also with GAPPS)!
exton No Comments AndroidextonExton Linux SystemsRaspberry Pi AIDA64Android 12Clash Of ClansextonF-DroidFirefoxGoogle Play ServicesRaspAnd 12Raspberry Pi 4SpotifyTermux

NEWS ABOUT LFA Build 220412
1. All packages the ordinary Linux user can wish for are pre-installed. Study the full packages list.
2. Kernel 5.17.2-amd64-exton (with Debian patches) is used. You can of course switch to Ubuntu’s original kernel if you prefer.
3. The Desktop environment is Gnome 42. (Ubuntu’s original DE).
4. The main Web Browser is Firefox. So you can watch Netflix!
5. I have included Refracta tools (Refracta Snapshot) to make it possible for you to create your own installable Ubuntu 22.04 Live DVD once you have installed LFA to hard drive.
6. You can run LFA fast in RAM. Use boot alternative 2 Load to RAM. The LFA ISO file is of only 1470 MB to be compared with Ubuntu’s original ISO of 2900 MB.
7. VirtualBox Guest Additions are pre-installed , which means (among other things) that you can run LFA in VirtualBox in full screen. Watch this screenshot.

Read about my Android-x86 Systems – 10, Pie, Oreo, Nougat, Marshmallow, Lollipop and KitKat at
andex.exton.net – latest is AndEX 10 (with GAPPS) and AndEX Pie 9.0 (also with GAPPS)!
and
about my Android 11, 10, Pie, Oreo, Nougat, Marshmallow and Lollipop versions for Raspberry Pi 4 and 3/2 at
raspex.exton.se – latest is RaspAnd 11 (with GAPPS) and RaspAnd Oreo 8.1 (also with GAPPS)!
exton No Comments extonExton Linux Systems Create you own installable Ubuntu system with Refracta SnapshotextonGnomeKernel 5.17.2-amd64-extonLFA LinuxRefracta InstallerRefracta snapshotUbuntu 22.04 LTS

NEWS 220406 ABOUT Exton|OS with KDE Plasma Desktop, Android Studio and Refracta Snapshot
The Desktop Environment in this Exton|OS build is KDE Plasma 5.24.4. Plasma is made to stay out of the way as it helps you get things done. But under its light and intuitive surface, it’s a powerhouse. So you’re free to choose ways of usage right as you need them and when you need them. Program content in build 220406: Most important are Refracta Snapshot and Android Studio with an excellent Android Emulator. You can run several Android systems directly in Exton|OS. Also with GAPPS (Google Play Services and Google Play Store) pre-installed. Watch a screenshot when Android 11 is running with Google Play Store enabled. Other pre-installed programs are Firefox, Gimp and GParted. Also all necessary additions in order to install programs from source. Kernel 5.15.0-23-generic is used. All packages have been updated to the latest available version as at April 6, 2022 Study the NEW PACKAGE list. Google Chrome has been removed since it’s now possible to use Netflix in Firefox. Using Refracta Snapshot you can change everything to your liking and create your own live installable Ubuntu system with Android Studio included. I mean create your own installable Ubuntu 22.04 LTS Live DVD once you have installed Exton|OS to hard drive. Ubuntu 22.04 LTS will be supported until April 25, 2027. In this version of Exton|OS VirtualBox Guest Additions are pre-installed. This means that you can run Exton|OS live (directly from the ISO file) in full screen. Watch this screenshot. I have also installed Nvidia Proprietary Graphics driver 470.94 so that you can use it while running Exton|OS live (from a DVD or a USB stick).

IMPORTANT NOTE: You can’t run Android Studio’s Emulator live if you don’t have plenty of RAM. (I.e. while running Exton|OS from a DVD or USB stick). On one of my computers with 32GB RAM I could run Android Studio without problems. On another with 8GB RAM I could see that the RAM was consumed almost immediately (while running Android Studio). Then the computer was “frozen”. You can also not run the emulator In VirtualBox and VMware. You’ll have to install Exton|OS to a “real” hard drive before you can use the Android emulator. In VirtualBox you will get an error message saying Your cpu does not support required features (vt-x or svm) – screenshot. That’s because VirtualBox as of yet does NOT support nested virtualization.

MOST IMPORTANT CHANGES IN BUILD 220406
1. This Exton|OS version is for UEFI computers.
2. I have installed and configured Android Studio. It has the very best Android Emulator with support directly from Google (the creator of Android). You can also develop your own Android apps in Android Studio.
3. Nvidia Proprietary Graphics driver 470.94 is pre-installed.
4. VirtualBox Guest Additions are pre-installed.

Read about my Android-x86 Systems – 10, Pie, Oreo, Nougat, Marshmallow, Lollipop and KitKat at
andex.exton.net – latest is AndEX 10 (with GAPPS) and AndEX Pie 9.0 (also with GAPPS)!
and
about my Android 11, 10, Pie, Oreo, Nougat, Marshmallow and Lollipop versions for Raspberry Pi 4 and 3/2 at
raspex.exton.se – latest is RaspAnd 11 (with GAPPS) and RaspAnd Oreo 8.1 (also with GAPPS)!
exton No Comments AndroidextonExton Linux Systems Android emulator with GAPPSAndroid StudioCreate you own installable Ubuntu system with Refracta SnapshotextonExton|OSKDE PlasmaRefracta InstallerRefracta snapshotUbuntu 22.04