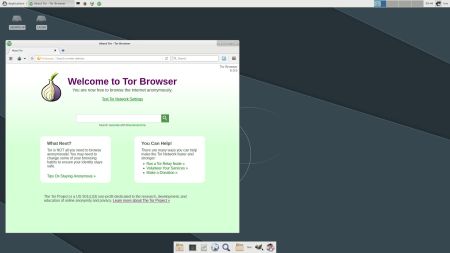 NEWS 161009 about DebEX Xfce4
A new version of DebEX Barebone with Xfce 4.12.1 and kernel 4.8.0-21-exton (equivalent to Kernel.org’s stable kernel 4.8) is ready. I have also installed Nvidia’s proprietary graphics driver 370.28 in this new version of DebEX Barebone. Read more about how to use it. All packages have been updated to the latest version as of October 9, 2016. DebEX Barebone is now based on Debian testing – stretch – (upcoming Debian 9) and Debian unstable – sid. I have replaced Google Chrome with Tor Browser – it prevents somebody watching your Internet connection from learning what sites you visit, it prevents the sites you visit from learning your physical location, and it lets you access sites which are blocked. The size of the ISO file has therefore increased from 1460 MB to 1620 MB. Announcement about Xfce 4.12, released 150228: Today, after 2 years and 10 months of work, we are pleased to announce the release of the Xfce desktop 4.12, a new stable version that supersedes Xfce 4.10. This long period can only be explained by how awesome Xfce 4.10 was. But as all things, it needed some refreshing – and for that we saw lots of new contributors providing valuable feedback, features and bugfixes. As always, Xfce follows its steady pace of evolution without revolution that seems to match our users’ needs.

Runs from RAM
All three DebEX systems can run from RAM. Use Boot alternative 2 (Copy to RAM). When the system has booted up you can remove the disc (DVD) or USB stick. You’ll need at least 2 GB RAM to run DebEX from RAM. I.e. superfast! It’s absolutely the best way to enjoy a Linux live system. Especially if it is a “big” system and you have lots of RAM. (DebEX Barebone, Gnome and KDE ISO files are of 1620 MB, 1830 MB respectively 1510 MB).

SCREENSHOTS
Tor Browser running when I’m logged in as the ordinary user live. (You can’t run Tor Browser as root).
Using Samba to connect to my Windows computers