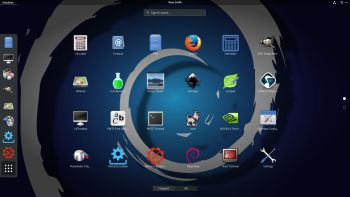 NEWS 171026 about DebEX Gnome/Mate
I have made a new extra version of DebEX, which I call DebEX Gnome Live DVD. It’s a pure Debian system using the testing (buster) and unstable (sid) repositories. Two Desktop Environments are pre-installed. Gnome 3.26 (latest) and Mate 1.18 (latest). I have also installed Nvidia’s proprietary graphics driver 387.12 in this new version of DebEX. To be able to enjoy Gnome 3.26 while running DebEX live (from DVD or a USB stick) you’ll need to have a new Nvidia graphics card installed. You can see which cards are supported here. Otherwise you’ll have to settle for Mate 1.18. (Not a bad choice btw). Furthermore I have installed replaced Google Chrome with Firefox 56.0. It is now possible to watch Netflix movies using Firefox in Linux. All other installed packages have also been updated to the latest version as of 171026. DebEX Gnome uses kernel 4.13.0-16-exton corresponding one of Kernel.org’s latest stable kernels 4.13.4.

Important about Refracta
You can use the Refracta tools (pre-installed in all three versions of DebEX) to create your own installable Debian Live DVD once you have installed DebEX to hard drive. I mean change everything and then create a whole new Debian live system. When you start Refracta it will look like this. You don’t even have to install DebEX to hard drive before you can use the Refracta tools. If you have plenty of RAM you can create a new (your own!) Debian 9/10 system while running DebEX from DVD or a USB stick. Please note that the whole Refracta process (creating your new ISO) will only take 10 – 50 min! You’ll find the ISO in /home/snapshots.