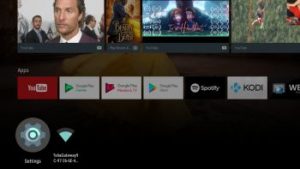 NEWS 170805 ABOUT RaspAnd Nougat 7.1.2 with Google Play Store working
I have finally managed to make a version of RaspAnd Nougat 7.1.2 (for Raspberry Pi 3), which has GAPPS installed and Google Play Store working. This version of RaspAnd can be installed in Windows using Win32 Disk Imager. The video performance is generally much better than in previous versions and the screen flickering is (almost) gone.

MORE ABOUT RaspAnd
RaspAnd Nougat 7.1.2 Build 170805 is an Android 7.1.2 Nougat system which can run on Raspberry Pi 3. I have included the following apps:
1) GAPPS (Google Play Services with Google Play Store)
2) Kodi 17.3 (latest version which “allows users to play and view most videos, music, podcasts, and other digital media files from local and network storage media and the Internet”. YouTube is enabled and working very well!)
3) Spotify TV 1.4.0 (working very very well)
4) Google Play Games 5.2.25 (needed for Clash of Clans to run)
5) Clash of Clans is not included, but you can install it through Aptoide TV
6) Gmail 7.4.23
8) Aptoide TV 3.2.3 (for installing new apps which can’t be found on Google Play Store – many many apps can be installed!)
9) ES File Explorer 4.1.6.7.4 working very well
10) Google Chrome 59.0.3071 (latest version – working very well)
11) YouTube 1.3.11 with almost perfect video quality. Please don’t update YouTube to version 2.00.18 even though Google Play Store wants you to do it. If you do you will loose video quality. If you do it by accident just uninstall the update. (I.e. go back to the “Factory version”).