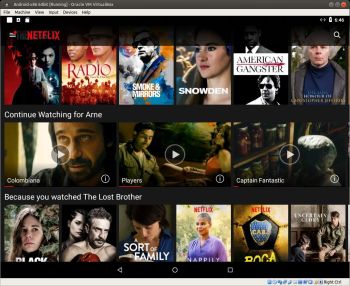 NEWS 181028 about AndEX Oreo 8.1 with Netflix
This build of AndEX Oreo replaces Build 180918. My new build of Android x86_64 – andex_x86_64-oreo-8.1-gapps-netflix-windows-launchers-1180mb-181028.iso can be installed to hard drive using the installation program or manually. You can also run the system live. I.e. from a DVD or a USB stick. On some computers you’ll have to start up AndEX 8.1 in compatibility mode (VESA) though. NOTE: You can run AndEX Oreo Build 181028 on newer laptops and Desktop computers. The sound and the video performance is generally very very good. Also when running the Netflix app!

MOST IMPORTANT CHANGES IN BUILD 181028
Google Play Store now works as intended. As an alternative you can use Aptoide App Manager, which also is pre-installed. Three nice special window launchers are pre-installed: Microsoft Launcher, Win 10 Launcher and OO Launcher. (OO Launcher is an enhanced Android™ O Oreo™ style launcher, with many useful enhanced launcher features). The Netflix app is pre-installed in Build 181028 – read below how to start/use it. I’ve discovered a new way to manually install AndEX Oreo to hard drive. Very simple! Read more below. You can now open up a terminal and become root with the command su root (which you couldn’t in previous versions of AndEX Oreo). Build 181028 uses kernel 4.18.14 with more support for various hardware. Most important: The install function works in this new version of AndEX Oreo. You can also install AndEX Oreo to a virtual hard drive while using VirtualBox and/or VMware. You can also run AndEX Oreo very well live in both VMware and VirtualBox. You can now install AndEX Oreo 8.1 in VMware using the install function (which you couldn’t in my previous AndEX Oreo builds). When booting from hard drive in VMware you’ll have to use the nomodeset boot alternative though.

Using Netflix
Before you can start the Netflix app you’ll have to go to Settings >> Android-x86 options and Enable native bridge to support apps with arm native libraries. Then start Netflix. Note: When running AndEX Oreo live (i.e. from a DVD or USB stick or live in VirtualBox or VMware) it can happen that you get an error message when you try to start Netflix. Just try again (up to about five times) and/or wait a few minutes. Or restart AndEX a couple of times. After that everything will be alright. When running AndEX Oreo from hard drive Netflix starts immediately when you want (with perfect video and sound quality). Note also: Whatever you do don’t try to upgrade Netflix. No other version than the one pre-installed will work.