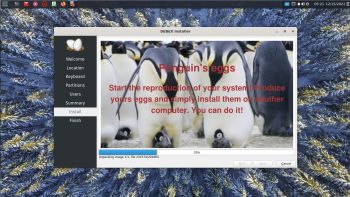 Most important Changes
When you start up DebEX Build 211215 live (from a DVD or a USB stick) you will end up logged in as the ordinary user user to the Budgie Desktop. The password for user is live. You can log out from Budgie and log in again to Gnome or Enlightenment. You can also log in from LightDM as root (super admin). The password for root is root. NOTE: You can’t log in to the Enlightenment Desktop when running DebEX Build 211215 in VirtualBox or VMware. You can use the Calamares 3.2.48-1 Installer Framework to install DebEX Budgie/Gnome/Enlightenment to your computer in any language. You can even use Calamares in VirtualBox and VMware – i.e. non-efi computers. Watch this animated GIF. My other DebEX builds were created with Refracta Snapshot. This DebEX Build (211215) is, however, created with a remaster tool called penguins-eggs. Very easy to handle. Penguins-eggs is a console utility, in active development, who let you to remaster your system and redistribute it as iso images or from the lan via PXE remote boot. You can use penguins-eggs in any Debian/Ubuntu system installed to hard drive. Basically you only need to start up a terminal and run the command sudo eggs dad -c. Then just follow the instructions – see the screenshots below. If you haven’t installed Calamares you will be asked to do so. Do that even if you already have Calamares installed. A system/ISO built with penguins-eggs must use a special Calamares version to be installable. Penguins-eggs is developed by Piero Proietti. It is based on Remastersys, Refracta, Systemback and father Knoppix.

Read about my Android-x86 Systems – 10, Pie, Oreo, Nougat, Marshmallow, Lollipop and KitKat at
andex.exton.net – latest is AndEX 10 (with GAPPS) and AndEX Pie 9.0 (also with GAPPS)!
and
about my Android 11, 10, Pie, Oreo, Nougat, Marshmallow and Lollipop versions for Raspberry Pi 4 and 3/2 at
raspex.exton.se – latest is RaspAnd 11 (with GAPPS) and RaspAnd Oreo 8.1 (also with GAPPS)!
exton No Comments extonExton Linux SystemsLinux BudgieCalamares InstallerCreate your own Debian system using penguins-eggsDebEXDebian sidEggsEnlightenment 0.24.2extonGNOME 40kernel 5.15.5-exton-amd64-rt21penguins-eggs