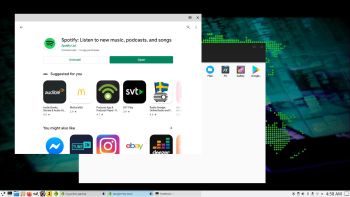 NEWS ABOUT ExTiX KDE/Anbox 20.12 201208
A new build of ExTiX KDE/Anbox is ready today. Some people had difficulties with Refracta Installer. I have therefore in my new build added Ubiquity (Ubuntu/Kubuntu original Installer) as an alternative to Refracta Installer. Choose the one you prefer. One advantage with Ubiquity is that you can choose language while installing. The language you chose will be the default language. When the installation is ready and you have booted up ExTiX from hard drive you can create your own user. That is done with the command sudo adduser myuser. You can also change root’s password with the command sudo passwd root. Watch a screenshot when Ubiquity is running.

ABOUT ExTiX 20.12 – Build 201205
I have made a new version of ExTiX – The Ultimate Linux System. I call it ExTiX 20.12 KDE Anbox Live DVD. (The previous KDE/Anbox version was 20.9 from 200825). I have now included Anbox (Android in a Box – Anbox puts the Android operating system into a container, abstracts hardware access and integrates core system services into a GNU/Linux system. Every Android application will be integrated with your operating system like any other native application). So now you can run Android apps in ExTiX. GAPPS (Google Play Services and Google Play Store) are pre-installed in ExTiX 20.12. The second best thing with ExTiX 20.12 is that while running the system live (from DVD/USB) or from hard drive you can use Refracta Snapshot (pre-installed) to create your own live installable Ubuntu/Anbox system. So easy that a ten year child can do it!

ExTiX 20.12 KDE Plasma DVD 64 bit is based on Debian and Ubuntu 20.04.1 LTS. The original system includes the Desktop Environment Gnome. After removing Gnome I have installed KDE Frameworks 5.68.0 with KDE 4.19. KDE Frameworks are 60 addon libraries to Qt which provide a wide variety of commonly needed functionality in mature, peer reviewed and well tested libraries with friendly licensing terms.

NEWS ABOUT ExTiX 20.12 Build 201205 with the KDE Plasma Desktop environment together with Anbox (Android in a Box), Refracta Installer and Refracta Snapshot
1. ExTiX KDE Plasma is based on Ubuntu 20.04.1 LTS Focal Fossa. KDE Plasma 5.104 is used as Desktop environment together with Anbox (Android in a Box). All packages have been updated to the latest version by 201205. Kernel 5.4.56-generic is used.
2. I have pre-installed Anbox (Android in a Box) with some useful apps. Among them Google Play Store and F-Droid. So GAPPS (Google Play Services and Google Play Store) are pre-installed in this version of ExTiX. Anbox won’t run live (from a DVD or a USB stick) or in VirtualBox. You will get this error message. That’s because VirtualBox as of yet does NOT support nested virtualization. Unfortunately you can’t run videos in Anbox. Sound will work, but you can’t play any videos. One exception though: You can run the YouTube app (pre-installed). Unfortunately not with the very best video quality.
3. Other included important/useful packages are: GParted GCC and other compilation tools so that you can install packages from source. Furthermore “all” multimedia codecs. Everything the average Linux user could wish for I would say.
4. I’ve installed Nvidia Proprietary Graphics Driver 450.80.02.
5. VirtualBox Guest Additions are pre-installed, which means (among other things) that you can run ExTiX 20.12 in full screen in VirtualBox. Watch this screenshot.
6. The second best thing with ExTiX 20.12 is that while running the system live (from DVD/USB) or from hard drive you can use Refracta Snapshot (pre-installed) to create your own live installable Ubuntu system. Very easy to do. When starting Refracta Snapshot you will see this.