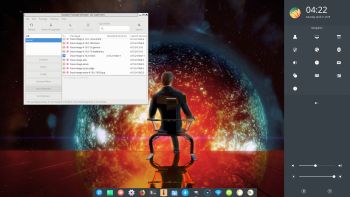 NEWS about ExTiX 18.4-2 Deepin 180421
I’ve released a new version of ExTIX 18.4-2 Deepin today with Calamares 3.1.12 and kernel 4.16.2-exton. Calamares is an installer framework. By design it is very customizable, in order to satisfy a wide variety of needs and use cases. All packages have been updated to the latest available version as of today. Study all installed packages in ExTiX Deepin Build 180421.

Refracta Tools
While running ExTiX Deepin 18.4-2 live or from hard drive you can use Refracta Tools (pre-installed) to create your own live installable Ubuntu system. A ten year child can do it!

THE IMPORTANCE of ExTiX LXQt now being based on Ubuntu 18.04 (UNSTABLE/DEVELOPMENT)
I don’t think it is too important since ExTiX Deepin doesn’t use complicated Desktop Environments like KDE, Gnome or Unity. Programs won’t crash or anything like that. And I haven’t discovered any bugs to report. Besides the FinalFreeze of upcoming Ubuntu 18.04 was already at April 19, 2018.