NEWS ABOUT LFA Build 211021 WITH LXQt 0.17.0
I’ve made one extra version of LFA. This time with the LXQt Desktop Environment instead of Gnome 40. This version of LFA is for older non-EFI computers. LXQt is a lightweight Qt desktop environment. It will not get in your way. It will not hang or slow down your system. It is focused on being a classic desktop with a modern look and feel. LFA LXQt works in the same way as the Gnome version – see below. Study the full packages list.

NEWS ABOUT LFA Build 211018 with Gnome 40
1. All packages the ordinary Linux user can wish for are pre-installed. Study the full packages list.
2. Kernel 5.10.70-exton-amd64-rt53 (with Debian patches) is used. You can of course switch to Ubuntu’s original kernel if you prefer that one.
3. The Desktop environment is Gnome 40. (Ubuntu’s original DE).
4. The main Web Browser is Firefox. So you can watch Netflix!
5. I have included Refracta tools (Refracta Snapshot) to make it possible for you to create your own installable Ubuntu 21.10 Live DVD once you have installed LFA to hard drive.
6. You can run LFA fast in RAM. Use boot alternative 2 Load to RAM – see below. The LFA ISO file is of only 1300 MB to be compared with Ubuntu’s original ISO of 2900 MB.
7. VirtualBox Guest Additions are pre-installed , which means (among other things) that you can run LFA in VirtualBox in full screen. Watch this screenshot.

When booting up LFA from a DVD or USB stick it will look like this. 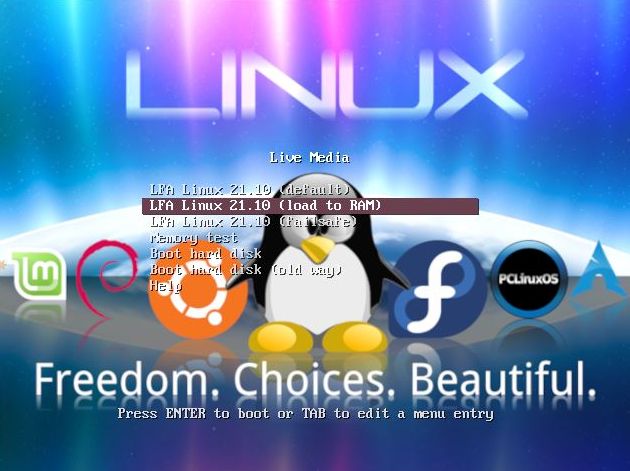 Read about my Android-x86 Systems – 10, Pie, Oreo, Nougat, Marshmallow, Lollipop and KitKat at
andex.exton.net – latest is AndEX 10 (with GAPPS) and AndEX Pie 9.0 (also with GAPPS)!
and
about my Android 11, 10, Pie, Oreo, Nougat, Marshmallow and Lollipop versions for Raspberry Pi 4 and 3/2 at
raspex.exton.se – latest is RaspAnd 11 (with GAPPS) and RaspAnd Oreo 8.1 (also with GAPPS)!
exton No Comments extonExton Linux Systems Create you own installable Ubuntu system with Refracta SnapshotextonGNOME 40LFALinux For AllRefracta snapshotUbuntu 21.10